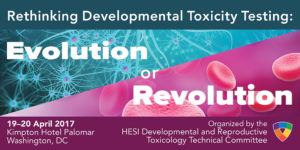 The thalidomide tragedy galvanized regulatory agencies into immediate and urgent action to develop a testing scheme to identify the potential teratogenicity of new drugs. The outcome was the three segment testing scheme that covered the reproductive cycle, including the Segment II protocol, which evaluates the effects of an agent on the fetus after maternal administration during organogenesis. While there have been some modifications to the protocol over time, it is largely the same method that was developed in 1965: the same animal models, the same emphasis on fetal morphological evaluation and roughly the same dosing regimens.

What if we were responding to the thalidomide tragedy today instead of 50 years ago, with 21st century science and technology available to us? Would we design the same protocol? If not, would it be radically different, or just an updated version of the 1965 design? This workshop is intended to address that question.

Defenders of the current protocol will point out that it is based on the seemingly solid proposition that embryonic development is so highly conserved across species that evaluation of morphological development in another mammalian species is highly relevant for predicting human teratogenic potential. While this is clearly the case for early stages of development of the embryo, phylogenetic conservation does not seem to be the rule for xenobiotic metabolism, pharmacokinetics, nutrition, placental anatomy and many other factors that have a strong influence on developmental outcome. In fact, scientists who were among the architects of the Segment 2 design pointed out these same limitations (e.g., Wilson, 1973).

We will consider new strategies to identify developmental hazards taking into account the current state of science which may include alternative possibilities or improvements to the current Segment 2 design. These considerations could include the use of new technology to overcome some of the limitations in predicting human response with current animal models or completely new radical approach to developmental toxicity hazard identification. These may range from having a critical paradigm to deciding when non-clinical studies are needed to the use of biotechnology (e.g., transgenic expression of human metabolizing enzymes in a pregnant animal model) and computational models [e.g., use global gene expression screening in a panel of developmentally relevant cell types to determine whether any developmentally relevant pathway (e.g., wnt signaling, retinoid receptor activity, etc.) is affected by the tested chemical] for hazard characterization. Working groups can consider either strategy, or combinations of the two.

The overall outcome of the project will be a paper describing possible approaches identified at the workshop. The intent will be to share the results with the broader scientific and regulatory community so that the ideas can be considered, and if feasible, empirically evaluated.

In vitro and in silico approaches for predictive toxicology, Thomas Knudsen, US EPA

Any cookies that may not be particularly necessary for the website to function and is used specifically to collect user personal data via analytics, ads, other embedded contents are termed as non-necessary cookies. It is mandatory to procure user consent prior to running these cookies on your website.