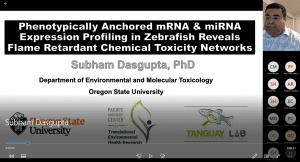 Dr. Subham Dasgupta is a molecular toxicologist, working as a postdoctoral fellow within Dr. Robyn Tanguay’s lab at Oregon State University. He received his BS in Human Physiology & MS in Environmental Science from the University of Calcutta, and his PhD in Marine Sciences at Stony Brook University, NY. He is trained as a developmental toxicologist, primarily using zebrafish embryos as a model, and has worked extensively with flame retardants during his postdoctoral positions at the University of California Riverside and Oregon State.

The ubiquitous use of flame retardant chemicals (FRCs) in the manufacture of consumer products leads to environmental releases and human exposures. Studying toxic effects of FRCs as a group is challenging since they widely differ in physicochemical properties. We previously used zebrafish as a model to screen 61 representative FRCs and showed that many induced behavioral and teratogenic effects, with aryl phosphates identified as the most active. In this study, we selected 10 FRCs belonging to diverse physicochemical classes and zebrafish toxicity profiles to identify the gene expression responses following exposures. For each FRC, we executed paired mRNA-micro-RNA (miR) sequencing, which enabled us to study mRNA expression patterns and investigate the role of miRs as posttranscriptional regulators of gene expression. We found widespread disruption of mRNA and miR expression across several FRCs. Neurodevelopment was a key disrupted biological process across multiple FRCs and was corroborated by behavioral deficits. Several mRNAs (e.g., osbpl2a) and miRs (e.g., mir-125b-5p), showed differential expression common to multiple FRCs (10 and 7 respectively). These common miRs were also predicted to regulate a network of differentially expressed genes with diverse functions, including apoptosis, neurodevelopment, lipid regulation and inflammation. Commonly disrupted transcription factors (TFs) such as retinoic acid receptor, retinoid X receptor, and vitamin D regulator were predicted to regulate a wide network of differentially expressed mRNAs across a majority of the FRCs. Many of the differential mRNA-TF and mRNA-miR pairs were predicted to play important roles in development as well as cancer signaling. Specific comparisons between TBBPA and its derivative TBBPA-DBPE showed contrasting gene expression patterns that corroborated with their phenotypic profiles. The newer generation FRCs such as IPP and TCEP produced distinct gene expression changes compared to the legacy FRC BDE-47. Our study is the first to establish a mRNA-miR-TF regulatory network across a large group of structurally diverse FRCs and diverse phenotypic responses. The purpose was to discover common and unique biological targets that will help us understand mechanisms of action for these important chemicals and establish this approach as an important tool for better understanding toxic effects of environmental contaminants.